The 3rd IEEE Conference on Network Softwarization (IEEE NetSoft 2017) will be held on 3-7 July 2017 at the School of Engineering and Architecture, University of Bologna, Italy.

SONATA will be giving two demos, one on the vCDN pilot and another one on the SDK.

These pilots are: i)Content Delivery Network (CDN) – targeted to Service Providers that want to deploy a vCDN (virtual CDN) for their end-users ii)Personal Security Application (PSA) – targeted to end users that would like a personalised security service. iii)Hierarchical Service Providers (HSP) – targeted to highlight recursive operation between two instances of SONATA platform. The proposed demo will be based on the vCDN Pilot, that will be deployed over the SONATA demonstration infrastructure that spans across two testbeds, one located in Athens and the other in Aveiro. The testbeds are interconnected via VPN links over the internet.

To know more about this demo, check the Demo proposal or visit the conference website.

-For the last demos, have a look at the poster: A Flexible Multi-PoP Infrastructure Emulator for Carrier-grade MANO Systems. 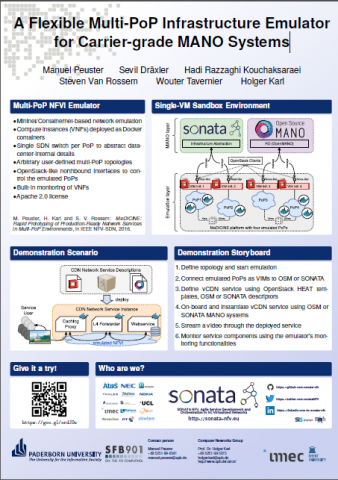